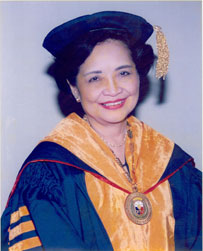 The nation’s renowned Pediatrician and National Scientist Perla D. Santos Ocampo joined our creator on June 29, 2012 at the age of 80.

The National Academy of Science and Technology, Philippines (NAST PHI), the nation’s highest recognition and advisory body on issues concerning science and technology, joins the scientific community in mourning the demise of National Scientist Perla D. Santos Ocampo, who was known for her significant contributions in the field of pediatrics. Her works in the twin scourges of diarrheal diseases contributed in the elucidation of etiologic factors and planning of control measures that reinforced international recommendations in oral rehydration and nutritional management. Her involvement in numerous community health projects and her spontaneity to serve others won her the respect and admiration of her peers not only in the country but also abroad.

NS Santos Ocampo’s relevant research studies impacted both clinical management and public health safety. She propagated the application of technical knowledge to serve the malnourished through various teaching/learning strategies and created a Committee on Rehydration which ultimately transformed into the Committee on Control of Diarrheal Diseases. These were all in her effort to curb diarrheal illnesses that continue to beset the country and neighboring nations.

She was an internationally recognized pediatrician and child development expert following her membership to the World Health Organization (WHO) Expert Advisory Panel on Maternal and Child Health from 1980 to 1982 and the Global Technical Advisory Group of the WHO on the Control of Diarrheal Disease Programme from 1987 to 1993. She also served as Secretary-General of the Association of Pediatric Societies of the Southeast Asian Region (APPSEAR) from 1974 and was elected as honorary president in March 2000. She was also the past president of the International Society of Tropical Pediatrics (ISTP) from 1989 to 1992.

At the local level, she served in various distinguished positions. She was the chairperson of the Department of Pediatrics, Capitol Medical Center from 1970 to 1980. She also served as president of the Philippine Medical Association from 1981 to 1982 and has been an eminent chairman of the University Research Council of the University of the Philippines (UP) Manila from 1994 to 1999. She also chaired the PGH Department of Pediatrics from 1979 to 1985 where she spearheaded innovations in continuing medical education through distance study courses in her areas of research, nutrition, and diarrheal diseases.

Her exemplary work as a researcher and a prolific writer produced over 200 papers, more than 30 distinguished research awards and membership in the Philippine Association of Medical Writers and the National Research Council of the Philippines (NRCP). Such extensive credit gave her the distinction of being an Outstanding Researcher of UP in 1990. She eventually founded the Pediatric Society Research Foundation and became its first president.

A top-notched institution builder and outstanding visionary leader, NS Santos Ocampo had been recipient of numerous awards and recognitions, locally and internationally. She was in the first batch of TOWNS (The Outstanding Women in the Nation’s Service) awardees in 1975. She was named Outstanding Researcher by the University of the Philippines in 1990, the Outstanding Filipino (TOFIL) Award by the Philippine Jaycee Senate and the Insular Life Insurance Company Ltd. in 1998, and a number of distinguished awards from many reputed institutions. At the international level, she was awarded with the highly esteemed Child health Foundation Medal and Prize by the WHO in 1985 and the Outstanding Pediatrician of Asia award in 1988.

Lauded for her significant researches in growth and development, and nutrition and diarrhea, which have influenced government policy decisions and program designs in the field of medicine, she was elected Academician by NAST in 1994. Academician Santos Ocampo served as member of the steering committee of the Inter Academy Medical Panel (IAMP) along with eight other members coming from the United States, France, United Kingdom, Turkey, Japan, China, South Africa, and India. The Panel is made up of representatives from 66 countries all over the world, which worked on the project entitled “Disease control priorities in developing countries.”

She served as a Chancellor of UP Manila from 1993 until 1999, where she was instrumental for the establishment of the National Institutes of Health Philippines in UP Manila through Republic Act (RA) 803. Recognizing the critical role of information and communication technology, she founded the National Telehealth Center in the same university, creating an Information Technology Complex at the UP-PGH. Towards the end of her term in 1999, she was elected president of NAST. Among her numerous projects as NAST President to strengthen the advisory and recognition functions of NAST were pushing for the creation of a law (RA 9107) to support the establishment of the Philippine Science Heritage Center (PSHC) which exhibits contributions of Filipino scientists and holding of timely roundtable discussions and fora on key and important national issues documented in publications, all for the promotion of a “Progressive Philippines Anchored on Science” and building a culture of science among our people.

In May 2010, NAST members endorsed Academician Perla D. Santos Ocampo to the Office of the President of the Philippines to receive the Order of National Scientist. She was conferred the prestigious rank through Proclamation No. 2099 issued by Malacañang on June 23, 2010.

NS Santos Ocampo obtained her Doctor of Medicine degree from the UP Manila in 1955 and finished 3rd in her class. She finished her Residency in Pediatrics at the UP-PGH and pursued a fellowship in Development Pediatrics at the Case Western Reserve University in Cleveland, Ohio, U.S.

Her legacy as a scientist and institution builder is only equaled by her unparalleled care for children.