Route of the BRP Ramon Alcaraz from the U. S. to the Philippines Who is Commodore Ramon Alcaraz?

Ramon Alcaraz was born on August 31, 1915. He was a graduate of the Philippine Military Academy Class of 1940 (the pioneer class of the PMA) After graduation Alcaraz joined the OffShore patrol (OSP) of the Philippine Army (the OSP is the fore runner of today’s Philippine Navy) and became the Captain of the Q-112 Abra, one of the three motor torpedo boats of the Philippine Army. He saw action during World War II under the direct command of Field Marshal MacArthur: among his missions were the scuttling and sinking of fifteen ships in the Pasig River to prevent their capture by the enemy, and his most famous exploit, when the Q-112 shot down three low-flying Japanese planes off Bataan in January 17, 1942. As a result of this action, the Japanese planes were unable to bomb their shore objectives. Field Marshall Douglas MacArthur personally decorated him with the Silver Star for his heroism.

On April 10, 1942, to prevent its capture by the enemy, Captain Alcaraz’s Q-112 Abra was scuttled near the shore of Paombong coast, four miles off Bataan’s east coast. He and his crew floated to shore using bamboo poles but were eventually caught by the Japanese and were subsequently incarcerated in Malolos. After he was freed, he joined the Philippine Constabulary, using it as cover for guerrilla operations in Bulacan and Northern Luzon,  and served as regimental commander of a guerrilla unit.

After the war, Alcaraz rejoined the OSP in order to modernize and strengthen  what became the Philippine Navy. In 1950, under orders of Defense Secretary Ramon Magsaysay, he was sent to the United States to study the organization of the U.S. Marines. Afterwards, he returned to the Philippines to organize the Philippine Marine Corps.

In 1964, Alcaraz was appointed head of the Naval Operations Force. New at the job, his first encounters with smugglers were less than stellar. However, in February of 1965, Alcaraz found a way to circumvent the smugglers’ tactics and was able to achieve record high busts during that year. According to Alfred McCoy in Closer than Brothers, Alcaraz was able to seize P750,000 worth of smuggled cigarettes each month. Behind the scenes, however, Alcaraz would find himself out of favor with Marcos because, according to McCoy, “Unknown to Alcaraz, theses [anti-smuggling] efforts simply forced the smugglers to take a new partner. Only days after his inauguration in December 1965, Marcos met secretly with smuggler-king Bocalan and agreed to restrain the navy patrols for a share of the profits.”

On January 11, 1966, during a radio broadcast from Malacañan Palace, Alcaraz’s name came up among the list of notoriously corrupt officials. Alcaraz did not stand for this and, in a speech he delivered during the change of command ceremony, the Commodore criticized the National Defense policy of the government. His actions brought about an investigation conducted by Undersecretary for National Defense Ernesto Mata, wherein Alcaraz was given an ultimatum: retire or be demoted. Alcaraz replied to this threat by saying “You can reduce me to Apprentice Seaman… I don’t care. My father was a farmer, I can go back to being a farmer.”

Weeks later, a friend of Ramon Alcaraz, Representative Rogaciano Mercado, exposed the whole incident. This would trigger President Marcos’ capitulation and force him to settle. During a session of the House Defense Committee, Commodore Alcaraz testified, proclaimed his vindication and again criticized the government’s national defense policy. Alcaraz left the witness stand amidst applause and signed his retirement papers.

In the 1969 elections, Alcaraz joined a group of retired officers backing Sergio Osmeña Jr. for the presidency. Dubbed the “Working Group,” they lobbied the top military officers of the country for clean and honest elections. The administration retaliated by conducting an investigation of Alcaraz’s real estate transactions.

After his arrest and feeling threatened  Alcaraz left the country with his daughter to live in the United States. During his stay in the United States, he continued to oppose the Marcos dictatorship by joining organizations against the administration in the Philippines. He was part of the Light a Fire group, the April 6 Liberation Movement, and the Movement for Free Philippines in Los Angeles. After Marcos was deposed in 1986, Alcaraz continued to advocate for the equity and justice for Filipino veterans.

Commodore Ramon Alcaraz passed away on June 25, 2009 in Orange County, Southern California. Five days after his death, the Kilusang Dekada 70, composed of First Quarter Storm and martial law activists based in the United States, paid tribute to Commodore Alcaraz for his actions as a martial law and anti-Marcos activist. During the 70th anniversary of the Fall of Corregidor on May 6, 2012, President Benigno S. Aquino III announced that the forthcoming acquisition of a second Hamilton Class Cutter would be named after Commodore Alcaraz: the first time a Philippine Navy ship has been named after a naval hero.

Alcaraz: Then and Now 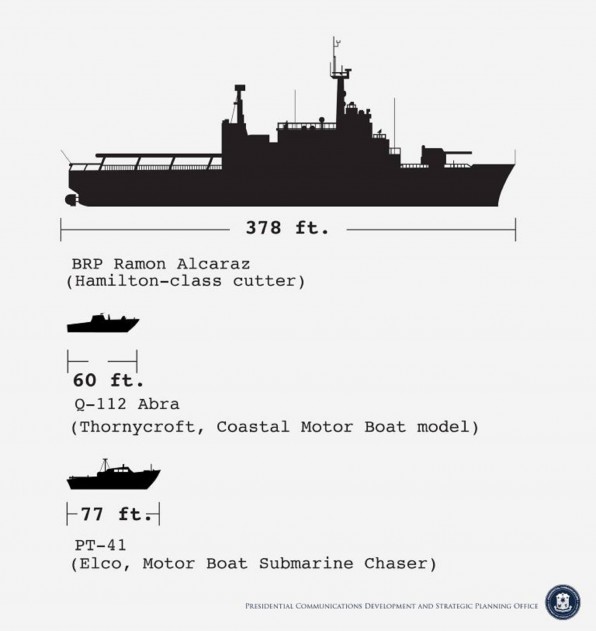 The figure compares the pioneer vessels of the Philippine Navy to the newly acquired Hamilton-class cutter. It is a Philippine Navy Gregorio del Pilar-class frigate named the BRP Ramon Alcaraz (PF-16), named after World War II hero, Ramon A. Alcaraz. The BRP Alcaraz departed from Charleston harbor last June 10, 2013 and is expected to reach Manila by August. The Alcaraz will serve to be a platform for the next giant leap in the capability and training of the Philippine Navy: a further step forward in the path to naval excellence pioneered by Ramon Alcaraz and his fellow war heroes.

The First Republic under President Emilio Aguinaldo had a small navy; it was a collection of seized vessels and never actually an organized military force. It was only with the passage of the National Defense Act in 1935 that the Philippines began the planning and organizing necessary to create a truly modern armed forces for the Philippines.

Part of that effort was the formation of the Offshore Patrol (OSP), which was envisioned to have a small fleet of fast and nimble torpedo boats. Field Marshal Douglas MacArthur said the Q-Boat fleet while “relatively small,” would, nonetheless, “have distinct effect in compelling any hostile force to approach cautiously and by small detachments.”

In the figure is a silhouette of one of those torpedo boats, which were called “Q-Boats” (to differentiate them from the American PT Boat flotilla). Made by Thorneycraft in England, the Q-111 and Q-112 Abra provided training opportunities for the OSP. They were later joined by the Q-113, the first of what were supposed to be many more Philippine-made Q-Boats. During the fighting of World War II, under the command of Ramon Alcaraz, the Q-112Abra took down three out of the nine Japanese Zeros on January 17, 1942. It continued to serve with distinction until the surrender of Bataan and Corregidor, when the crew of the Q-Boats scuttled their vessels rather than surrender them to the enemy.

The American PT Boats, on the other hand, also distinguished themselves when John D. Bulkeley brought Field Marshal MacArthur to Mindanao and President Quezon and family from the Visayas to Mindanao.