From the Philippine Postal Corporation 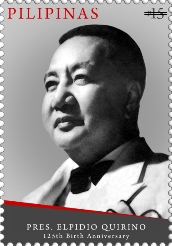 “The Philippine Postal Corporation (PHLPost) deeply remembers the life, achievements and philanthropic work of the late President Quirino, who also became a teacher before being elected as the highest chief executive in the country, with the issuance of Philippine postage stamps to commemorate his 125th Birth Anniversary”, Postmaster General Josie de la Cruz said.

A grayscale photo of President Elpidio Quirino was used in the background of the stamps with the word “Pilipinas” at the top.

Quirino is recognized as the father of the Central Bank of the Philippines, of the Minimum Wage Law and the precursor of SSS.

As an economist he foresaw the growing energy needs of the Philippines by establishing Maria Cristina Hydroelectric Power Plant in Iligan and Ambuklao Dam in Benguet.

He assumed the Presidency in 1948 when President Roxas died in office. A widower, he lost his wife Alicia and children Armando, Norma and Fe during the battle of Manila in 1945.

PHLPost printed 300,000 pieces of the commemorative stamp sold at P15.00 each. The stamps and first day cover issues are now available at the Manila Central Post Office Postshop outlet and post offices nationwide. For inquiries, please call 527-01-08 or 527-01-32.