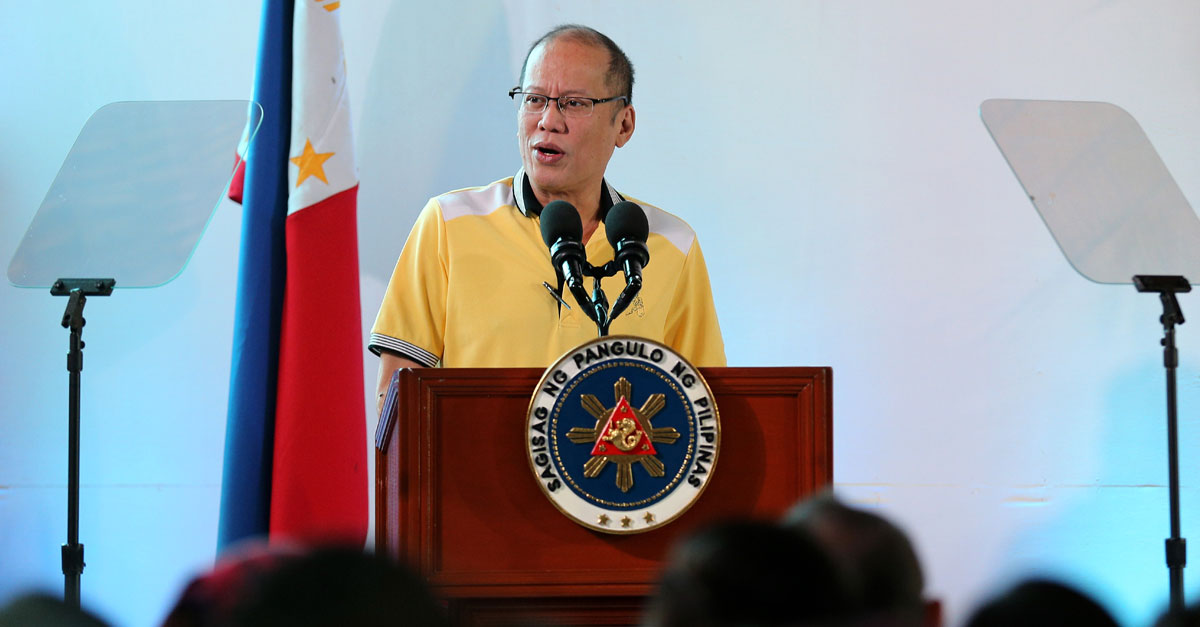 Speech
of
His Excellency Benigno S. Aquino III
President of the Philippines
At the opening ceremony of the third Global Society Business Summit and Gawad Kalinga’s 13th anniversary

Can I just pay special attention again to the brothers Oquinena, one of whom is also with the Philippine Information Agency as Director General and is really doing a splendid job. Luis is now Executive Director of Gawad Kalinga and as you can see there is visible signs of progress in the project which was inaugurated about five years ago. When Mr. Tony Meloto was introducing me, I thought he was going to say “eligible bachelor.” [Laughter] I intend to change that status come July 1. [Cheers and laughter] Meaning, that will be the priority. [Laughter]

The video is kind of interesting, I noticed I had a lot more hair at that point in time. [Laughter] If the hair was the expense to pay for everything that has been happening in this area, then I guess that was a worthwhile investment. [Laughter and applause]

Visiting a farm like this definitely brings back memories. For those of you who might not know, one of the jobs I took early in my career, in fact my first job, was with the Philippine Business for Social Progress. During my time there, we reached out to farming communities and worked with them on a variety of undertakings. For instance, we helped them make the most of the farmland they had, there was actually a program on how to maximize a land holding of one hectare that includes the housing unit. We introduced them to financial systems, guiding them until they could learn how to deal directly with banks. This is for urban entrepreneurs.

Suffice it to say, the work you do in Gawad Kalinga is very close to my heart and perhaps the outgrowth of those initial attempts. Standing witness to what you have achieved throughout your existence, I am convinced that the spirit of service among young Filipinos is not simply alive; it is more vibrant than ever before. Since 2003, GK has reached so many of our countrymen in need, building 2,500 communities in the Philippines, most of them in areas that are most vulnerable to calamity and conflict. I am also particularly fascinated by this Enchanted Farm, which, I am told, serves multiple purposes: Apart from being a community that simply helps your partners to take hold of their own destinies, the farm is also a university for social education, a destination for social tourism, and a hub for social business. Indeed, if you can foster even more communities like this, then perhaps your goal of developing half a million social entrepreneurs by 2024 may not be a distant dream, and we can have even more Filipinos working to uplift those at the bottom, and making certain that their work is recognized in the local market and—perhaps eventually—in the international market as well. We have just had a report that you are already making tremendous efforts in the international market.

I thank everyone in GK—Mr. Tony Meloto, all the social entrepreneurs, and above all, those in your communities, who give meaning to your work—for all that you have done to get to this point. You are true embodiments of your theme today, which is: “The Business of Kindness: Doing Good Makes Good Business Sense.” Indeed, this is an excellent philosophy, and you will find that it bears a striking ideological resemblance to the philosophies that have guided our administration’s national strategy to sustain our growth. Perhaps some of you have heard of the Philippine resurgence of the past, and of our administration’s commitment to channel our gains to massive investments in our greatest resource, which is the Filipino people.

There is our large-scale Conditional Cash Transfer program, which gives cash grants to poor households, as long as they send their children to school and have them vaccinated, among other conditions. We have increased the budget of this program more than six-fold, and its coverage has skyrocketed from around 786,000 in June 2010 to around 4.4 million households today. The goal now is to reach 4.6 million households for this year. Now, one would expect that the results of such a program would only be seen in the long-term, but the early results are promising. According to the preliminary results of an assessment conducted by the Department of Social Welfare and Development, this program has helped lift 1.5 million Filipino families, or over 7.7 million of our countrymen, from abject poverty. And we will not stop there: Moving forward, the plan is to have this program cover even those considered “near poor”—families who are just one major illness or natural disaster away from sinking back under the poverty line.

We have also made major investments in education, and the results have been clear for all to see: By 2013, under the leadership of Secretary Armin Luistro, the Department of Education had cleared our inherited backlogs in classrooms, school seats, and textbooks. We have also been able to upgrade our basic education cycle to be at par with international standards, which will give our students more time to absorb their lessons. Through our Technical Education and Skills Development Authority, especially under Joel Villanueva, we have likewise pursued programs like TESDA-STAR, which, quite frankly, reminds me of some of GK’s projects. [Applause] The STAR program, which we are undertaking in partnership with Coca-Cola, stands for the Sari-sari Store Training and Access to Resources Program, and it involves training sari-sari store owners in bookkeeping, inventory management, accounting, and other disciplines, as well as maximizing their new profits. So far, it has trained 35,655 Filipinos, with the goal of eventually training 200,000 such entrepreneurs. Might I add, that most of them are making a lot more than my salary. [Laughter]

Of course, there are also the projects we have worked on together with GK, including the Agri-Social Enterprise showcase of the Department of Agriculture in this very farm, which helps provide livelihood to the farmers. There is also our partnership between the Department of Agrarian Reform, GK, and the Shell Foundation, which helps Agrarian Reform Beneficiaries by assisting them in formulating business plans, and in acquiring much needed farm equipment.

All these initiatives reinforce the idea that business—and governance—driven by kindness makes the most sense. After all, when we help those who have the least—when we equip them with the skills they need to take advantage of the growing number of opportunities—we do more than empower them as individuals; we also empower them as consumers. Think about it: When we are able to increase the income they take home, more than allowing them to live more dignified lives, that also means they have greater capacity to participate in the growing economy: they buy products and ride public transport, and they remit more taxes—taxes that in turn give government the wherewithal to empower them even more. What we see here is a virtuous cycle of vibrant economic growth and inclusivity—one that can guarantee that our nation’s economic growth continues far into the future, and is felt across the archipelago.

Indeed, meeting with all of you in this farm reinforces my optimism about the future, and might I just add: Sometimes when we listen to supposedly learned people who have nothing to but complaints on their agenda, it is really refreshing to go to areas like GK where we have partners in doing positive changes for our people [Applause]. Back when people were asking me whether I am open to amending the Constitution and running for a second term, I told them: The future of the country cannot lie on the shoulders of just one person. Each and every Filipino must contribute to achieving our collective goals as a nation. [Applause] And today, having witnessed the goodwill, the kindness, and the talent of those in this farm, I am more confident than ever before that the Philippines is indeed in good hands—that even as I step down from office, this nation will choose to tread the Straight Path, and eventually bequeath to the coming generations a Philippines we can even be more proud of.

Thank you and good day.