Briefer: The Judicial and Bar Council

The Judicial and Bar Council

The Judicial and Bar Council’s (JBC) primary task is to recommend appointees to the Judiciary and the Office of the Ombudsman for the President’s perusal. The council aims to enhance the quality of the search, screening, and selection process, as well as insulate the process from undue influence of any kind.

An important function of the JBC is the creation of a list of nominees for the position of Chief Justice of the Supreme Court. Below is the process in brief (for more details, see Sec. IV): 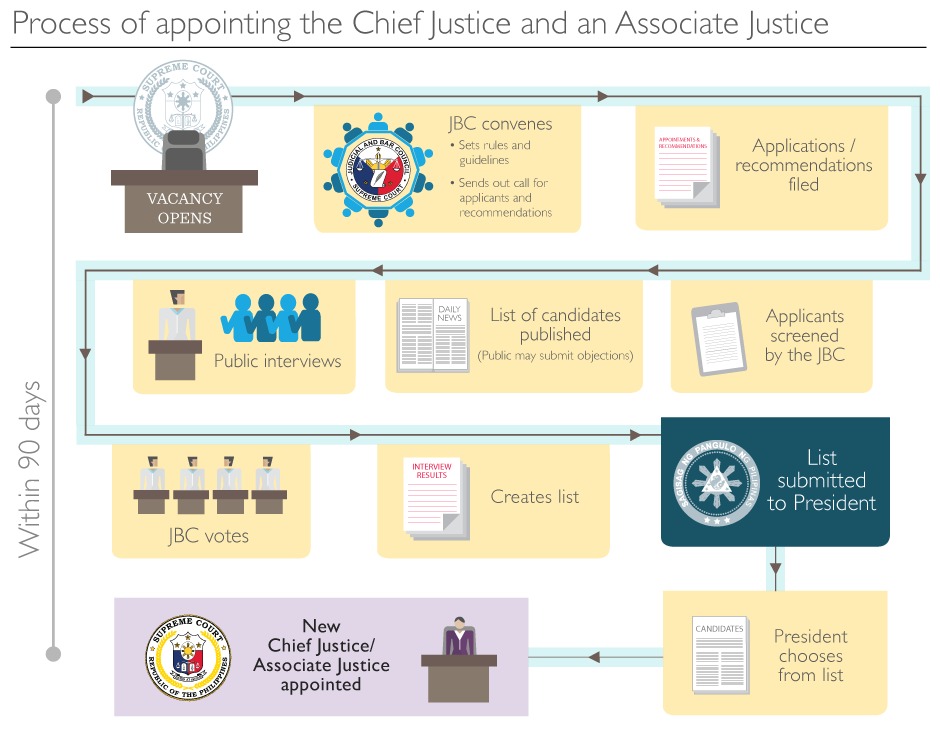 I. Historical progression of the appointment of a chief justice and members of the Judiciary

From 1902 to 1935, it was the prerogative of the President of the United States to appoint the Chief Justice of the Philippine Supreme Court.

“The Members of the Supreme Court and judges of inferior courts shall be appointed by the President.”

After the EDSA People Power Revolution of 1986 ended the Marcos regime, and the 1987 Constitution was ratified, a new check-and-balance measure was created to limit the appointing power of the President to the high court and to ensure the participation of Congress, the Judiciary, and the private sector in the appointing process. The new constitution created the JBC by virtue of Article VIII, Sec. 8 (5):

“The Council shall have the principal function of recommending appointees to the Judiciary. It may exercise such other functions and duties as the Supreme Court may assign to it.”

II. Why was the JBC created?

The idea of creating a JBC was introduced by former Chief Justice Roberto Concepcion during the debates of the 1986 Constitutional Commission in order to depoliticize the process of appointments. On July 14, 1986, Chief Justice Concepcion said that the JBC is “an innovation made in response to the public clamor in favor of eliminating politics in the appointment of judges.” He was also of the position that the creation of such a body was necessary because “neither the President alone nor the Commission on Appointments would have the time and the means necessary to study the background of every one of the candidates for appointment to the various courts in the Philippines.” He stressed that the search for acceptable candidates would be particularly difficult given the constitutional amendment stating that no one would be qualified for judicial positions unless he or she “has a proven high sense of morality and probity”—an amendment adopted that same morning, July 14. He said investigative agencies at the President’s disposal, such as the National Bureau of Investigation, lack qualifications “to pass upon questions of morality, integrity and competence of lawyers.”

The same day, Commissioners Jose C. Colayco and Ricardo J. Romulo defended the creation of the JBC, stating that it aims to strengthen the independence of the judicial branch of government by preventing the President from whimsically or arbitrarily choosing members of the courts. According to Mr. Colayco, “the creation of this Council would ensure more the appointment of judges and justices who will be chosen for their confidence and their moral qualifications, rather than to favor or to give something in return for their help in electing the President.”

Mr. Romulo in the meantime said: “[W]e can have any form of government we like and we are safe, provided we have an independent and competent Judiciary… And if we are trying to bolster the independence of the Supreme Court it is because in the end it is the Judiciary that will protect all of us. We are not trying to create an independent republic out of the Judiciary, only an autonomous region.”

III. Who are the members of the JBC?

The Constitution provides for the composition of the JBC to include the following:

1. Representatives of the three branches of government as ex-officio members (i.e., the Chief Justice, the Secretary of Justice, and a member from the Legislature); {{1}}

2. A representative of the Integrated Bar of the Philippines;

4. A retired member of the Supreme Court;

5. A representative from the private sector.

Members from the government are automatically members of the JBC by virtue of their office. The other four members, however, are appointed by the President and would have to go through the process of being confirmed by the Commission on Appointments.

IV. How are candidates nominated?

The Constitution provides that a vacancy for the  positions of Chief Justice, Associate Justice, Ombudsman, Deputy Ombudsman, and judges of other courts must be filled within 90 days (by virtue of Article VIII, Sec. 4 of the Constitution and Rule 1, Sec. 1 of the Rules of the JBC). As soon as a vacancy opens in the Supreme Court and the Office of the Ombudsman, the position is “ipso facto” open to applications.

The JBC convenes and prescribes specific dates for deadlines for the filing of nominations and the form in which applications should be submitted. They then send out a call for applicants or recommendations.

Copies of the list shall likewise be posted on three conspicuous places in the said area. Copies thereof shall be furnished to major nongovernmental organizations in the city or municipality where such vacancy is located, including the Integrated Bar of the Philippines and its corresponding local chapter.

The long list shall contain an invitation to the public to inform the Council, within ten days, of any complaint or derogatory information against the applicants. The Council may choose to direct a discreet background check on the applicant or require the nominee to comment in writing or during the interview.{{2}}

Applicants are screened by the JBC

They shall also be evaluated according to

1. Competence, to be measured by

2. Integrity, by means of

4. Sound physical, mental, and emotional condition, by means of

In addition, the following are disqualified from becoming nominees (see JBC Rule 4, Sec. 5 and Sec. 6):

The JBC will prepare a short list of candidates they wish to interview. The Council, en banc or any authorized set of members of the Council, shall interview the candidates to “observe their personality, demeanor, deportment, and physical condition; assess their ability to express themselves, especially in the language of the law in court trials/proceedings and in their decisions or rulings; test their mastery of the law and legal principles; inquire into their philosophies, values, etc.; determine their probity and independence of mind; and evaluate their readiness and commitment to assume and fulfill the duties and responsibilities of judgeship.” Only the members of the JBC may ask questions during the interview.

Although media accessibility will be subject to the rules promulgated by the Council, these interviews shall be conducted in public. For this purpose, the schedule of the interviews shall be published in local- and general-circulation publications. The reports on the personal interviews, however, are declared strictly confidential documents upon submission to the Secretary of Council and shall only be made available to the members of the JBC.

A list of candidates that passed the screening process is submitted to the members of the JBC for their final voting and approval. The JBC shall again meet in executive session for the final deliberation. A majority of the members must approve of a candidate in order for his or her name to be included in the final list of nominees that will be submitted to the President. A list of nominees usually consists of five to six names.

The President may appoint anyone included in the list of the JBC with no need of confirmation by Congress.

[[1]] According the Fr. Joaquin Bernas, during the Constitutional Commission of 1986, the article from the Judiciary was accepted before that of the legislature. Therefore, only one slot was given to the legislature, which was unicameral in the Constitutional Commission’s initial deliberations. However, since the ratification of the 1987 Constitution, a member from the House of Representatives and the Senate would both hold the position and would have half a vote each. On July 17, 2012, the Supreme Court ruled that only one member from the legislature may sit as a member of the JBC.[[1]]