The Aquino administration took office at a time when corruption undermined the economy and the credibility of the country, even as it ate away at the country’s social fabric. Under President Aquino’s leadership, a culture of integrity, accountability, and transparency is being institutionalized. The government has taken a two-pronged approach: To establish a culture of accountability among those in public service, and to soundly manage the nation’s coffers—which includes both ensuring its prudent disbursement and that the people’s money is used only for the benefit of the citizens. The results are obvious: Revitalized institutions, confidence in what was once a struggling economy, and greater opportunities opening up for the Filipino people.

To sustain this renewed confidence in the government and its institutions, the Aquino administration holds public officials to the highest standards of integrity, as well as accountability in the use of public funds. Indeed, accountability to the law and to the Filipino people is at the core of this government’s anti-corruption reforms; in the past three years the administration has strived to embed this in state processes and mechanisms, as well as relentlessly pursued those who betrayed public trust for their personal gains—regardless of position, wealth, or status.

A new Ombudsman was installed to advance the campaign for a clean government, replacing a predecessor accused of mishandling cases. The appointment was in fulfillment of the President’s and the citizenry’s hope for “an honest-to-goodness anti-corruption office, not one that condones the corruption and abuses in government.” The administration’s pursuit of judicial reform likewise came to fruition when Congress impeached the Chief Justice for betraying the public trust. A new Chief Justice of unquestionable integrity was then appointed to lead reforms in the judiciary—reforms that will allow courts to dispense justice quickly, without sacrificing fairness and foregoing proper procedures. Plunder charges were filed against a former president and former officials of the Philippine Charity Sweepstakes Office for the alleged misuse of funds; cases have likewise been filed against high-ranking officials violating the Anti-Graft and Corrupt Practices Act, through the misappropriation of funds and the proliferation overlooked irregularities under their watch have likewise been held accountable. Anti-corruption drives in revenue-generating agencies have been intensified, with the government increasingly aggressive in filing cases against tax evaders, smugglers, and erring officials of the Bureau of Internal Revenue and of the Bureau of Customs.

The Aquino administration’s relentless campaign against corruption in public institutions has been backed by legislation, to ensure that reforms geared toward fighting corruption and poverty would be irreversible and sustainable.

The Governance Commission for Government Owned or Controlled Corporations was created in 2012, in an effort to curb excesses in the sector and to ensure that GOCCs are managed in a transparent, responsible, and accountable manner; and with the utmost degree of professionalism and effectiveness.

Three laws were enacted to strengthen the country’s fight against transnational criminality and terrorism:

Ex Parte Application of Court Order, which grants the Anti-Money Laundering Council authority to undertake ex parte inquiry into suspicious financial transactions after securing court approval without the need to inform the suspects;
Republic Act 10365, which amended the Anti-Money Laundering Act to include the list of covered institutions and transactions;
Terrorist Financing Suspension Act of 2012 that defined the crime of terrorism financing.

Prudent policies, founded on sound management principles, have allowed the national government to improve the Philippines’ fiscal position. Reforms in the 2013 national budget of the Aquino administration have accelerated the delivery of priority programs for inclusive growth, particularly investments in infrastructure and funding for social services. In the process, critical measures have been put in place to further strengthen the Philippine economy. 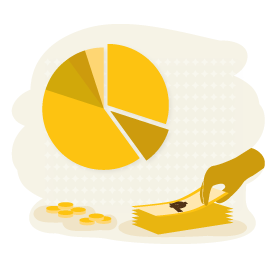 The national budget for FYs 2011, 2012, and 2013 were enacted before the yearly deadline, which gave government agencies time to properly implement projects within the set timeline, thus avoiding costly delays. In 2012, the national government increased expenditures by 14.1% or to P1.56 trillion, compared to the P1.2-trillion level in the same period of the previous year. This rise in government spending was a factor in the rise of the country’s GDP in 2012; it ignited a cycle of better infrastructure, leading to more investments, and generating more jobs.

Spending on maintenance and other operating expenditures (MOOE) grew to P97.9 billion in the last four months, registering a P22.8 billion or 30.4-percent increase from last year’s disbursements. The government’s spending on preparatory activities for the 2013 national, local, and ARMM elections—as well as increased provisions to cover the Department of Social Welfare and Development’s (DSWD) Conditional Cash Transfer Program and the National Statistics Office’s (NSO) conduct of Census of Agriculture and Fisheries—are credited for the disbursement jump.

Public spending on infrastructure and other capital outlays (CO) surged to P75.2 billion in the first four months of 2013—a P23 billion or 44.8% year-on-year increase. Resource gaps for the construction of irrigation systems, classrooms and other education facilities, as well as hospitals and health centers were also addressed through significant disbursements by the Department of Agriculture, the Department of Education, and the Department of Health, respectively.

The Aluling Bridge (P191.37 million) connecting the towns of Cervantes, Ilocos Sur and Tadian, Mountain Province. The project was first conceptualized in 1978.
The Candelaria Bypass Road Project (P557.50 million), which decongested traffic along the Daang Maharlika Highway in Quezon by 40%.
The Laguindingan Airport Development Plan (P7.85 billion), an international-standard domestic airport in Misamis Oriental, which is expected to benefit 1.6 milion passengers per year and help boost tourism in Northern Mindanao.
The Ternate-Nasugbu Road (P860 million), connecting the coastal towns of Ternate, Cavite and Nasurbu, Batangas to Metro Manila.
The Jalaur River Multi-Purpose Project, first conceptualized in the 1960s, and which will benefit farmer in Iloilo by providing year-round irrigation.

Recognizing the value of ease of information access in people empowerment, as well as the deterrent effect of transparency on corruption, the government has instituted reforms that allows for more transparency in government operations and in the use of public funds. Websites of government agencies have been mandated to feature appropriated budget, public offerings, and project implementations status, for public access and scrutiny. The Department of Budget and Management has likewise built online infrastructure that provides citizens the opportunity to monitor the disbursement of public funds.

The Aquino administration has established a merit-based incentive program that recognizes and rewards exemplary performance of government employees. Launched in 2012, the PBB ultimately aims to improve the delivery of goods and services to all Filipinos, as well as to institute a culture of fairness and excellence in the bureaucracy.

Without raising taxes, improved tax collection efficiency led to a 12.9% year-on-year increase in revenue, from P1.36 trillion in 2011, to P1.53 trillion in 2012. Anti-corruption drives in revenue-generating agencies were likewise intensified, targeting tax evaders, smugglers, and erring officials of the Bureau of Internal Revenue and of the Bureau of Customs. Since 2011, a total of 734 cases of tax evasion and smuggling have been reported, 495 of which have been forwarded to the concerned agencies; 24 respondents were either suspended or dismissed by the BIR or the BOC.