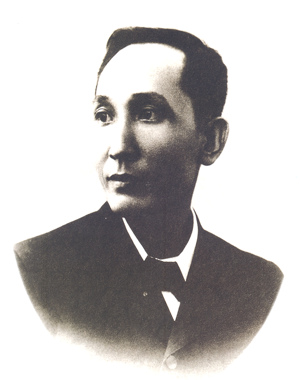 According to the Implementing Rules and Regulations of the Honors Code, the Gawad Mabini shall be conferred for

Entries on the 2012 Gawad Mabini Awards:

Statement: The Secretary of Foreign Affairs during the 149th Birth Anniversary of Apolinario Mabini and Conferment of Awards Ceremony, July 23, 2013

Speech of President Aquino on the 148th birth anniversary of Apolinario Mabini, July 26, 2012

Remarks of the Secretary of Foreign Affairs on the 148th birth anniversary of Apolinario Mabini, July 26, 2012

Who may be conferred the Gawad Mabini? It may also be conferred ad diploma{{1}} on those who provided substantive support to a foreign visit by the President or who contributed concretely to the successful preparation and/or hosting by the Philippines of a major international event.  In this context the Gawad Mabini would be conferred for events at the level equivalent of the Vice President and above.

The award is composed of three ranks:

Grand Cross (Dakilang Kamanong) – Conferred upon a former or incumbent Secretary of Foreign Affairs, Chief of Mission, Cabinet member, or other high official who heads a Philippine delegation to an important international conference on a ministerial level, and, as a result thereof, has made substantive contributions to public interest and public welfare.

Commander (Dakilang Kasugo) – Conferred upon an officer with a rank between career minister to Foreign Service Officer class IV, or upon personnel of a government agency who serves as an Attache in a Foreign Service establishment, as recommended by the Chief of Mission or the Principal Officer of the post served, as the case may be, or by the Secretary of Foreign Affairs, in the case of personnel in the Home Office.

Member (Kasugo) – Conferred upon a staff officer or employee of the DFA, as recommended by the Chief of Mission or the Principal Officer of the post served, as the case may be, or by the Secretary of Foreign Affairs, in the case of personnel in the Home Office.

Insignia of the Gawad Mabini The insignia of the Gawad Mabini is a stylized Romanian Cross with a red triangle in the center with stars on each corner and which bears the image of Apolinario Mabini. It is surrounded by three stylized letter Ks. The composition of the medal for a Grand Cross is silver gilt, while, for Commander and Member, is gilded bronze or copper. The ribbon is composed of three equal stripes, red, yellow, and blue, evoking the colors of the Philippine flag.

Process of nomination and conferment

The Department of Foreign Affairs recommends the conferment of the Gawad Mabini on individuals.

The Gawad Mabini may be conferred by the Secretary of Foreign Affairs in the name and by authority of the President.

[[1]] When an honor is conferred ad diploma, only the diploma is presented to the recipient. The recipients of awards ad diploma may, at their discretion, procure the insignia on their own account.[[1]]